About a month or two ago, M decided that we should use Martingale collars instead of our usual ones, and since the old ones were getting dirty anyway she ordered these very very special collars made just for US!

Martingales are usually used for hounds, whose necks are thicker than the head. The collars are chokers but unlike choke chains which put pressure on the trachea, these martingales put pressure on the entire neck, so they don't damage the throat. It acts as an anti slip collar as well, which is why hounds usually use these. But M thinks we need this too as I loveeee to back out of my collar. Its fun!

Apollo not only has a Martingale, he has a walking lead as well, which is a Martingale collar and lead all into one. It was also custom made for Apollo and M loved the design. It has padding at the collar part as well and Apollo says its much more comfortable than the old collar. 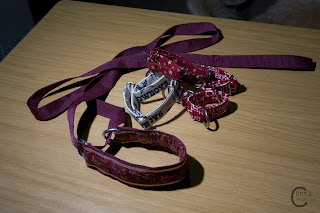 Right in front: Apollo's walking lead. The red collar with stars is Tinker's, the one white and blue is Kola's and the red and white BITCH collar is MINE!

Apollo's martingale collar is not in this picture as M took all the gear from the previous beach trip to take this peekture. 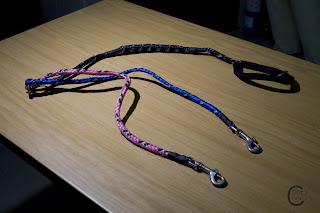 The coupler with the shock absorbing lead.

The part where the coupler extension connects to the lead is made of three rings, so it won't tangle Kola and I up. Thats the main reason why M decided to get a coupler.

Your Royal Candylicious Nyx at 2:44 AM

Pieces of Our Lives accessories, going out 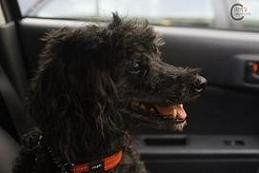